There are a few things I miss in the summer. Soup is one of the big ones!! As I think you know, I love soup. LOVE IT. All kinds of soup too. Vegetable soup, butternut squash soup, chicken soup, chili, and so on. I make at least one soup a week and usually I make a few different ones. (I also miss red wine! While you can still drink it during the summer, I don’t tend to.)

This past week I did a lot of perusing on the internet for new recipes that would get me excited about cooking and healthy eating again. I thought this was going to be a tall order to fill – thankfully I was surprised by how quickly I was able to get excited again! To me, this meant I had the timing just right – if I was able to find some recipes that got me excited, I was definitely ready to get back on track and enjoy it. There is nothing worse than forcing yourself into something when you’re not quite (or far from) ready for it.

One of the recipes I found was from the SkinnyTaste Blog (I would be lost without this blog – if you’re looking for recipes check it out.) The recipe was a new one from Gina, a Cream of Zucchini Soup. I was so excited to find a soup that was appropriate for the summer season! I immediately printed out the recipe (yes, I’m horrible because I still print out recipes from time to time. I like having paper in front of me instead of devices – what can I say!?)

Since Thursday was a half day at the office I thought it would be the perfect time to get to Wegman’s, pick up some zucchini and get this soup started for Thursday night’s dinner. I started by cutting a little over half of an onion (I think my onion was medium sized, not small because I love onion flavor!) and some garlic… 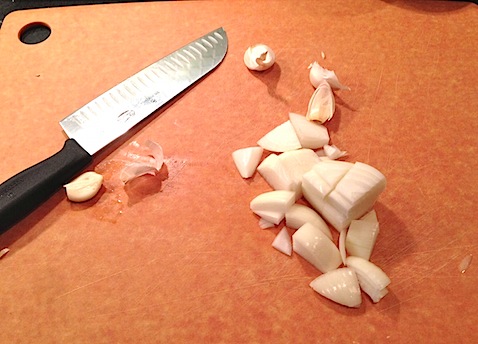 I switched the recipe a little bit because people in my house are not really able to eat onions that are not sautéed for a while. I added a little olive oil into my pot and cooked the onions for a few minutes before adding the chicken broth and the rest of the ingredients. Before I knew it I had a pot full of goodness:

Then I had the (brilliant?) idea of adding some chili flakes to the mix:

This definitely brought some heat into the soup – if you like spice and heat this is a great addition to the soup – if not, definitely leave it out! I brought the pot to a boil (this seemed to take a long time, probably because I was so excited for the end result). As we waited the sous chef and I snacked on an entire fresh tomato – it tasted so amazing. We also had some blue corn chips and spicy hummus.

Eventually the soup came to a boil, I turned down the heat and covered it for 20 minutes. Once the timer had gone off, I removed the soup from the heat. I put on a grill glove and started blending the soup with my immersion blender. I have a Calphalon immersion blender and it is wonderful. It has five speeds, a turbo setting and it always does a great job blending soups. A lot of times I use my Vitamix for blending but sometimes it’s great to just whip out the hand blender and keep everything in the pot! I was a little nervous about splashing myself since I was wearing summer clothing (a tank top – lots of skin to possibly be burned) so I wore a Webber grill glove for the first few minutes. Once I realized that the blender was doing such a great job (no splashing!!) I felt comfortable taking the glove off (it goes all the way to my elbow practically!)

Once I had most of the vegetables blended, I took a taste to see about adding some salt and pepper. I could really taste the chili flakes! There was a really nice underlying heat in the soup mixture. The chicken broth from Wegman’s is fairly low in sodium, so sometimes I will add a little salt (I am still all about minimizing additional salt and sodium in my dishes when at all possible!) I added a pinch of salt. I added some freshly ground pepper. We also added three heaping spoonfuls of Fage 0% greek yogurt to bring some creaminess to the soup. It cooled down the spice from the chili flakes just a little. It was a great balance!

I served up a small bowl to try the soup before I served it for dinner. I added a little of Wegman’s 2% Colby cheese and a dot or two of Trader Joe’s hot sauce. The end result was wonderful – the perfect summer soup! 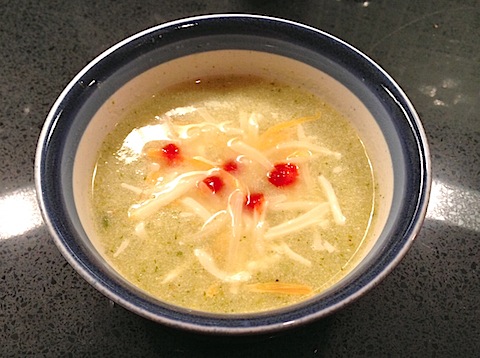 Spices if desired (I loved adding the chili flakes, and I added about 1/2 a tablespoon)

Kosher salt, pepper to taste (taste the soup first – depending on the chicken broth you use, your soup could already have enough sodium for your taste!)

Your favorite cheese for topping (freshly grated parmesan cheese is great! I had Wegman’s 2% Colby Jack on hand and that was a great addition, too)

Heat olive oil in your pot. Once oil is hot, add the chopped onion. Sauté for five minutes. Add chicken broth, chopped zucchini, garlic, and pepper flakes (optional). Bring soup to a boil. Once soup is boiling, turn down the heat to low and cover (soup should continue on a low simmer) for 20 minutes. After 20 minutes, remove pot from heat. Carefully purée with your immersion blender until all the big chunks are gone. Add the yogurt, purée again until a smooth consistency is accomplished.

Serve with cheese if you’d like, a nice hot sauce is also a great option. I enjoyed mine with a nice piece of crusty French bread and a side of grilled chicken!