I am usually rather hungry on Mondays, as sort of a rule. I can never really avoid it. I think it has something to do with coming off of my weekend schedule of sleeping later, eating breakfast later and thus pushing back my entire eating schedule during the weekends.

My first breakfast was a Luna bar. I really love this peppermint stick flavor! 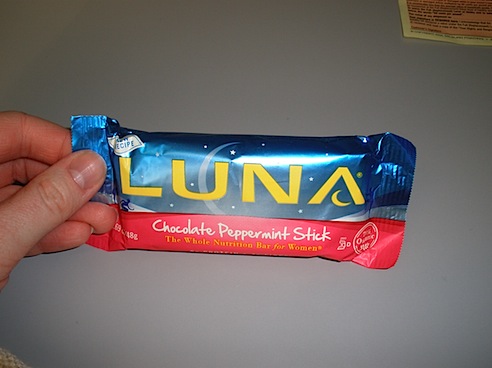 I was sort of rushing around this morning, didn’t have time to make breakfast and for some reason I was not in the mood for my instant Kashi oatmeal. I was fine with the Luna bar until about 9:30 when I started getting hungry again. By ten o’clock my stomach was talking to me. I did not have much to choose from. It was one of those days when I thought I had packed a lot of food… but maybe I did not pack enough.

I ended up paying a visit to the vending machine… ew. I had 60¢ for a small bag of pretzels. I was glad the bag was small. Only 160 calories. By 11 o’clock I was hungry again. I snacked on a small apple. By this point I could not believe that I had eaten so much and it was not even lunch yet. But I had been awake for a while. . . At the end of the day I also realized that I had skipped my cup of coffee from the caf this morning. I usually have one cup of coffee from home (in my to go mug) and then another one about an hour or so after I have been at work. Maybe I should not skip that cup of coffee – at least on Monday mornings! 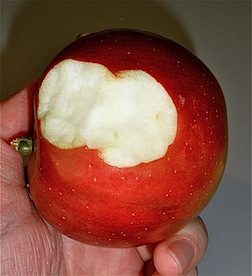 I left my camera at home today, in case you haven’t been able to tell – these are old ‘file’ photos from past blog posts 🙂

Lunch was great. One cup of fresh pasta tossed with pesto and a few pieces of chicken sausage along with a large garden salad (mixed greens, carrots, grape tomatoes, mushrooms, red peppers and cucumbers!) After my lunch I sipped on some peppermint tea which was really perfect on such a rainy and windy day.

At three o’clock I was hungry again. I had a Larabar. 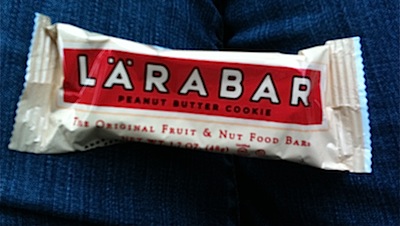 I hate eating more than one bar a day – but I did not know what else to do! At least once I had the Larabar my hunger was finally satisfied.

Dinner was around 7. I had a third of a chicken breast, roasted veggies and a piece of bread along with a big glass of water. 🙂 Yum.

Ok – I have to go to bed. Another long day tomorrow! Hope everyone’s Monday was awesome! I don’t know about you – but I am missing Conan already. Sigh.