Today is the first day of Autumn – my favorite season! I think that Autumn is beautiful. Weather wise you cannot ask for a better combination: the temperature most of the time is lovely, the mornings are crisp and cool, it sometimes heats up in the afternoon, and things cool right down in the evenings for perfect sleeping weather. Ahh! It is also a great time to cook! Soups, stews, chili, and lots of other meals are perfect for this time of year.

I spent the past week on vacation. I did not do too much cooking, but I did spend some time in the kitchen. The first day of vacation I made berry scones, and we ate them for breakfast for a few days along with Greek yogurt and fruit. We had lunch at home every day – wraps with low sodium turkey, lettuce, tomato, hummus and mustard. We sometimes had blue tortilla chips on the side. It was such a relaxing week – we went on long walks every day. We also went out for dinner almost every night!

One night a friend came to visit us while we were on vacation, and I opted to make dinner at home for us that night. I used one of Jenna’s recipes and it was a big hit. The recipe I used was Lightened Up Cajun Chicken Pasta.

I did not have a lot of great options for snapping a photo of dinner – but here is how my cajun chicken pasta turned out:

(It might look like a lot of pasta, and of course it is – but I used a lunch plate for my serving!)

We came back from vacation last night – and immediately I felt the need to make something for dinner that was on the healthier side, since we had done a lot of eating out while we were away. While we were on vacation we picked up the latest addition of Cooking Light which is a great issue for week night dinners. The idea was that the recipes in this magazine have five ingredients and / or can be put together in 15 minutes or less. There are a lot of shortcuts in these recipes (understandably) and you can opt to take the shortcuts or not.

Last night I made a black bean soup with an avocado salsa. Let me tell you – this was a great meal! It didn’t make our kitchen too messy, either which is always a great thing especially during the work week:

This photo was taken after I had cleaned up just a little bit – but really, the kitchen was pretty under control during this process. The soup came together quickly on the stove:

I did make a couple of changes to the original recipe because I was not in a huge rush last night. I diced up half of an onion, and sautéed it with a tablespoon of olive oil. After the onion had been cooking for a bit, I finely minced two garlic cloves and threw them into the pan to sauté for a couple of minutes. After the garlic had cooked a bit, I put in a can of black beans. We mashed the beans a bit, and then added another can of black beans (we always use the lowest sodium option for black beans – and we rinsed and drained them). Then we added a 14.5 ounce can of roasted tomatoes (from Trader Joe’s). We added a tablespoon of cumin, a dash of smoked paprika and freshly ground pepper. After stirring all of the seasoning in, I added half a cup of chipotle salsa (from Trader Joe’s – this stuff is so good.)

I brought the soup up to a boil, and then turned down the heat to let it simmer for several minutes. I stirred it every couple of minutes. While the soup was cooking, I put together the avocado salsa. This “garnish” was such a winner!!! It tasted so fresh and the lime really made the soup pop so much more than having the soup just on its own. The salsa called for one avocado, diced. Two tablespoons of chopped fresh cilantro, the zest of one lime, and the lime juice of one line. A smidge of sea salt, and some freshly ground pepper was also added.

Everything came together. I served the soup up, and I garnished mine with some 2% cheddar cheese from Wegmans, 0% plain Greek yogurt (instead of sour cream) and of course – the avocado salsa. 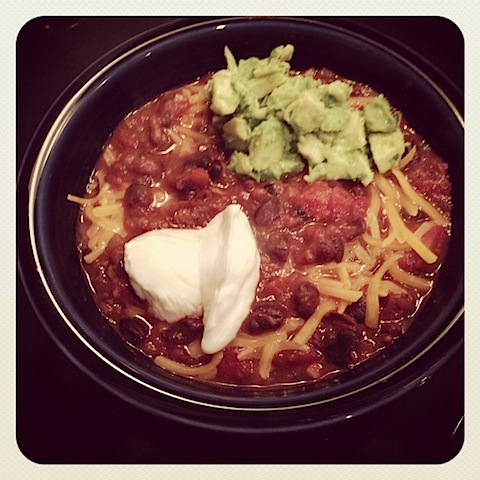 I loved this soup and cannot wait to make it again! One suggestion from our meal last night was next time we might add some lime juice directly to the soup.

This morning I really wanted to make regular pancakes – but we did not have milk (coming back from vacation yesterday afternoon, we went to Trader Joe’s – but did not pick up milk.) So I decided to be creative and use what we had and make up some special pancakes. I opened up a can of pumpkin, scooped up 1 cup of Kodiak cake mix and 1 cup of water. The mix was definitely different with the addition of the canned pumping – the mixture was very moist and the pancakes were a little difficult to cook all the way through. But eventually I got the hang of it!

I added a small splash of vanilla to the mix along with cinnamon and nutmeg which gave the pancakes even more of a fall flavor to them.

I am definitely looking forward to cooking more now that the cooler weather is back. I will be sharing the meals with you on a more regular basis! Happy Sunday, blog readers. See you later this week!