The last few days have been busy – but I’m happy to say I have stayed on top of my healthy eating effort! While I have been getting back into the swing of things I have put maintaining healthy eating above all else – including a budget. Not that I’m going to spend an exorbitant amount of money – but if it is between getting fast food or a healthy prepared meal from Whole Foods (and spending a few extra dollars) I am voting for Whole Foods every time.

On Tuesday night I went for a run (and it was h-o-t!) and after I swung by the neighborhood (smaller) Whole Foods. I picked up three of my favorite things – balsamic chicken breast, firecracker slaw and couscous along with some other fruits, veggies and a bag of WF reduced fat and sodium popped popcorn. I felt set for the next couple of days! 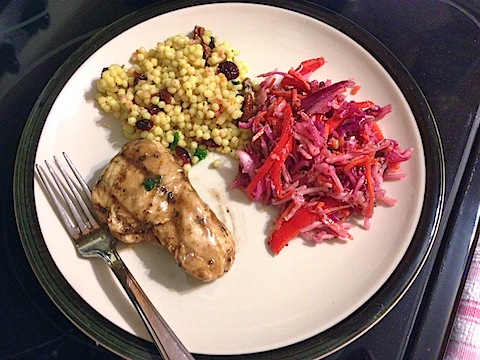 The lean protein from the chicken really hit the spot, and because I was eating dinner so late (I waited until later than normal so I could run outside that night instead of on the treadmill) I did not need a dessert or another snack after dinner. Winning! The firecracker slaw is absolutely one of my favorite summer items from the Whole Foods prepared food bar – there is NO MAYO in this slaw (yuck!) and it is so fresh and crunch – and filling and full of vitamins.

For breakfast on Wednesday I toasted an light whole wheat english muffin, melted a light babybel cheese on top and cut up a hard boiled egg. I added a couple of drops of hot sauce, too.

Breakfast was great and it got me through until lunch time – and that is always a benefit in my book. Sometimes when I have a granola bar or something small or processed I am hungry a couple of hours after.

Another great great breakfast from earlier in the week was a low carb wrap, banana slices and Justin’s peanut butter. It was really filling and satisfying – yet another morning I got through until lunch without having to snack at my desk:

Lunch this week was mostly turkey wraps with vegetables and fruit on the side:

In the afternoons I was still getting a little hungry, so every day I packed about two cups of light popcorn and snacked on that in the afternoon when I felt hungry. On Wednesday I was still hungry after the popcorn, so I nibbled on a small piece of turkey jerky!! Even just a little bit got me over the hunger hump – I think this piece had about six grams of protein and not many calories – my kind of snack!

Once I got home from work / exercise every night I would have a handful (or two) of Pop Chips because I was starving and needed to take a shower before preparing dinner. Sometimes I would also snack on a few cherry tomatoes before my shower! Dinners this week were chicken every night with vegetables and a carb. Well balanced. I snacked on a handful of yogurt covered raisins during the nights, too as I was reading. But mostly the dinners kept me full and I did not go back into the kitchen looking for more food – it was quite a turn around.

I even ate off the same plate most of the week, so the pictures look the same!

Thursday was a half day at work, so I didn’t feel like making my hard boiled egg breakfast. I got through the morning on a Chobani 100 (blueberry). Once I left work I went right to the grocery store to get some food for the weekend (I loaded up on fresh produce and it was so fun!) Once I got home I made a version of an egg sandwich for lunch and it was so tasty:

I also had a peach: 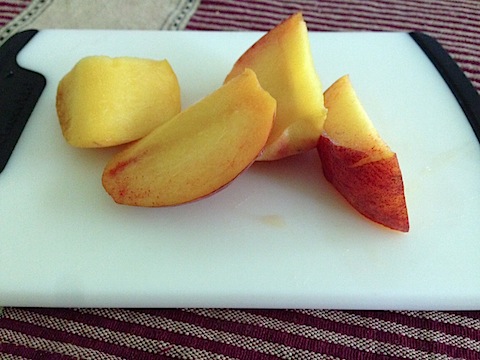 Overall I think this week was a true victory for me. I ate really well (less pizza and cake – more vegetables and lean protein!) and felt SO much better. As I told myself at the beginning of the week, there is really no excuse to focus on fresh fruits and vegetables during the summer. Everything is fresh, local and tastes amazing!! I am taking full advantage of it while it lasts!

Happy Summer everyone – stay cool and safe over the holiday weekend!