I can make it through one more day of work, right?? 🙂 Yes, I am pretty sure I can make it! Even though I really wish I had been on vacation this week, the work week has gone by pretty quickly. I sort of feel like I am plowing through the days, the commutes, the waking up super early, etc. I hope I can keep up these early mornings once September comes around.

So, today I took the train for the first time this week. I am thankful that I saw the sign on the highway broadcasting that there was a Patriots football game tonight. I love the Patriots. I was a Pats fan waaaay before it was a cool thing to be. My dad and I used to drive around on Sundays doing errands and listening to the Patriots games on the radio. Those were the days that the franchise did not sell enough tickets to the games to have them broadcast on television. We were sort of a bad team. But I still was a die hard fan. Now, the Patriots are super popular, and if there is a Pats game during the week, I try my BEST not to drive to work – because the drive home will take me HOURS. Because thousands of people go to the games. (Tens of thousands, actually)

Anyhow. I took the train. I read my book during the morning commute… until I sort of fell asleep. Seriously.

For breakfast I had a coffee from ABP and an un-photographed Larabar. It was peanut butter and jelly flavor. It was great! But I have to say one thing about the two recent Larabars I have enjoyed (chocolate chip cookie dough and peanut butter and jelly). One thing I always loved about Larabar was that they do not add salt to their bars, and there is quite often literally NO SODIUM in their bars. This is amazing, and really hard to find, especially in the “bar world”. (yes, there is a sub culture ‘bar world’ out there, in case you were wondering) However, the two bars I had this week, had salt as one of the ingredients. It sort of made me sad. I know it tastes really good, and I am sure salt is one of the reasons why. I also know that a little bit of salt is not a big deal (I have an abnormal dislike and fear of sodium, FYI). But it is one of the reasons I love Larabar and one of the things that has me recommend them to everyone I know. I’m just saying, for the record.

I did snap a shot or two of lunch. Just so you know, part of my lunch today was a ‘prepared’ item (ie sodium) because I had such a busy night the evening before. An Amy’s burrito really saved me today! But I had other really great aspects to my lunch, too:

A very ripe peach (it was fantastic – and my colleagues were really envious of my lovely piece of fruit, it smelled amazing, too!) and slices of red and orange peppers. TIP: Slice up some veggies at the beginning of the week, during a hectic evening and you do not have a lot of time to pack lunch – grab a handful of already sliced veggies, they go a long way to add nutrition to any lunch!

I dipped my peppers into hummus, which I had in this trusty container: 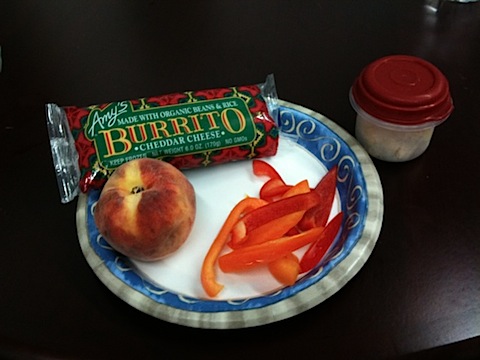 I was starving and had lunch right at noon today.

I am really sort of excited because I have been getting back into exercise this week. Monday after work I went to the gym. Wednesday after work I went to the gym – and my mom came with me! I had her do 15 minutes of warming up on the bike, she then did 20 minutes on the elliptical. We did weight training (arms) and ab exercises. It was really fun! I liked having a gym buddy.

After the gym last night, I met my friend Megan for dinner at Red Stripe. I did not have my camera, and my iPhone did not work all that well since it was dark, and the phone does not have a flash. But here you go anyway:

This was my dinner. Meg snapped this photo with her Blackberry (flash and all!) This is one of my favorite meals in the entire world. Comfort food to boot! What is on my plate, you might be asking…. that is a Red Stripe Grilled Cheese. The best sandwich around, if you ask me! A grilled cheese with prosciutto, poached pear, and basil pesto. Along with an amazing bowl of roasted plum tomato soup with a lovely bit of crème fraiche – which makes all the difference when it comes to tomato soup!

Meg and I had a great dinner. I was really contemplating grabbing a Starbucks before meeting up – but it was 7pm and I knew if I was drinking a latte or some sort of caffeinated drink, I would not be able to sleep. I was home around 9:30 and sleeping by 10 🙂

OK, I’m signing off for now. I am thankful that I have already prepped my lunch for tomorrow – which you will see tomorrow. Until then, bloggies. See you soon!