How has your Saturday been? I have had a fun one so far, and I am really looking forward to the Harry Potter fest I have planned for tonight! My oatmeal really kept me going for hours today, which is such a great thing.

At 11 o’clock I met my good friend Danielle at the Farmer’s Market and we had a great time walking around and purchasing a few items. I bought three small fresh herbs: rosemary, parsley, and chives – they were 1 dollar each – what a deal!

After the market, I went to the gym since I was already half way there. I did not have a hardcore workout planned for today, but it was good to get moving. I did half an hour on the bike, biking 6 miles while reading the latest Runner’s World magazine. After the bike I did the elliptical machine for twenty minutes and watched the Red Sox game – so relieved that they won!

I got home a little bit after 3 o’clock. I was starving. I quickly started chopping vegetables and prepping to make a pretty amazing omelette for a late lunch or brunch. In the mix:

chives (fresh from the market)

On the side I had two slices of whole wheat bread: 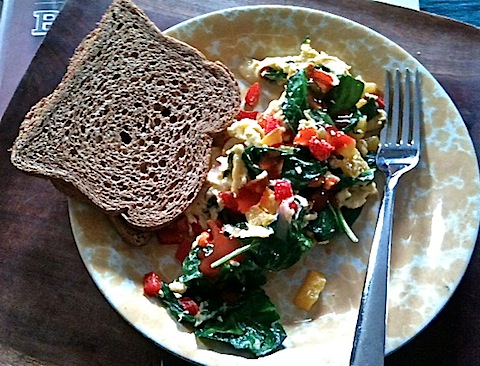 It really hit the spot. About an hour later I was still a little hungry, so I had a glass of 1% milk with a bit of protein powder and a bit of coffee left over from this morning. What a great drink!

This afternoon I went out to Target and picked up the latest Harry Potter movie. I cannot believe that I have yet to see Harry Potter and the Deathly Hallows Part I. It came out in the theaters while I was in the hospital, and by the time I was well enough to go out to the movies, it was no longer in the theaters! HP And the Deathly Hallows was an amazing book – so I am really looking forward to the movie. Right now I am re-watching Harry Potter and the Half Blood-Prince because I have not seen it in ages, I hope it will bring me up to speed.

I have Mike & Ikes and Twizzlers to snack on later! 🙂 Fun movie night candy.

Tomorrow I have a four mile run planned, but due to the weather I fear it might have to be on a treadmill. Ugh. They are forecasting rain in the morning. Boo!

Hope you are all having a great weekend!

I spiced up the mixture with a few shakes of hot sauce.