Ok, yes, I know – I have not posted in days. What happened to me, you might wonder… I don’t have an answer exactly – but rest assured, I am still here.

The week was so busy, but it went by rather quickly. Almost every day I had either a Kashi bar or a yogurt for breakfast. Every single day last week I had a salad for lunch. By Wednesday I finally started adding some serious protein to my salads – it went a long way in helping my workouts become much better, thankfully.

Wednesday’s salad was a masterpiece of sorts: 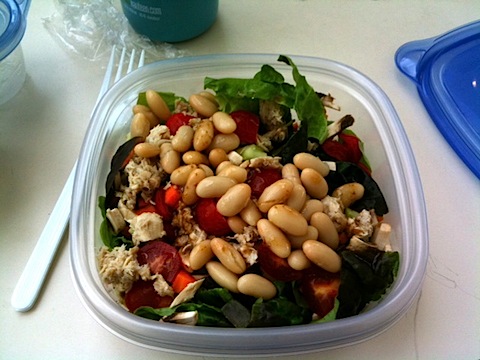 All of the usual vegetables, but for added protein there was tuna and white beans. I will start making more of these salads. Sure, it requires extra thought, time and containers – but it was so worth it! The day before I had only consumed about 9 grams of protein before going to the gym and I had a horrible workout. After eating this salad, I had one of the best workouts I could remember!

By Friday afternoon I was exhausted. I think my body is still getting used to working five (super busy) days at work. It’s definitely an adjustment. On Friday I walked in the house, put down my bags and walked right upstairs to my bedroom. I climbed under the covers, set my alarm for 5:30 (that would have given me an hour nap) and fell asleep within five minutes (that never happens to me). When I woke up, it was 8pm. My alarm had gone off, I had not heard it, and I kept sleeping. I had no idea – and I was totally confused when I woke up and the sun was setting. I was disappointed because in my head I had a run scheduled for Friday evening. But my long nap was so much better (and probably needed) and I spent the rest of the night eating left overs and catching up on my TiVo 🙂

On Saturday morning I woke up, ate half a banana and peanut butter and had a small cup of coffee. The sun was out (sort of) and it was warming up into the 60s. It was the first time in DAYS it was not raining outside. I thoroughly enjoyed my morning run (4 1/2 miles) and treated myself to a Starbucks iced latte after. I spent the afternoon at a graduation party for one of my close friends – it was a great afternoon and evening (with lots of fantastic eats and drinks!).

I woke up Sunday to an over cast day, the temps were only in the 50s. It felt more like the beginning of April than the middle of May. But even though it was on the cooler side, I decided it was the perfect day for a long run. No sun, and it was not too hot. I was tired, but after a piece of toast and peanut butter I laced on my running shoes and hit the trails. I felt so accomplished after running 6.3 miles today! The one goal I had this weekend was to run a 10K because I thought once I did I would be less nervous for my big race at the end of June. It took me one hour and ten minutes. 🙂

Well, I’m signing off. I don’t know where this weekend went – but it went by way too quickly. I have got to get ready for work tomorrow and get my week’s plans (meals, exercise, etc.) mapped out.

I hope you all had a great weekend! See you tomorrow.