Today was just one of those days. It was raining (big surprise), it was a Monday, it took me one and a half hours to get to work, it was a super busy and long day at work, people were annoying me, I got bad news at work [thankfully, I guess, not regarding work] and the day sucked.

So, on my way home I decided to drive out of my way to go to the nice grocery store in hopes of picking up some awesome produce for the week, thinking that would help make my day better. I walked into the market, picked up a basket, picked out a nice looking avocado, then started looking at the other produce. Everything was horrible – I can’t even explain it to you. There were five red peppers in the entire market, all of them were ugly and horrible. There were only four orange peppers – and after that, I simply gave up. I put the avocado back and walked straight out of the store. Seriously.

So. No groceries for Heather. I came home not having any idea what I was going to have for dinner, seeing as though I had no food. The thought of take out crossed my mind, but I was actually too tired to drive to any of the good restaurants to order and pick up the food. (For the record, I am not about to waste a ‘take out meal’ on something that is not awesome.)

A work out would probably have helped my mood out quite a bit, but my trainer had specifically told me not to work out today after two days of some serious mileage (almost 11 miles).

Thankfully I had a frozen burrito from Whole Foods in the freezer, and some fixings. I literally threw some stuff on a plate and ended up with a decent meal. I particularly enjoyed smashing the avocado that we happened to have in the kitchen. It was at the perfect ripeness and was instantly mashed into homemade guacamole – it went perfectly with my not too shabby frozen burrito. I also found some salsa, and I had more of my homemade coleslaw (Bittman classic recipe).

It looks ugly – but it was quite good, thankfully, because I was in need of a decent meal after a not so decent day. 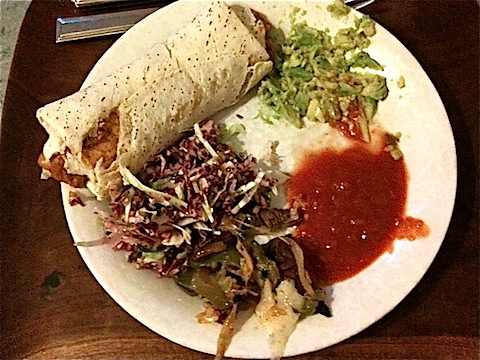 Ew. Not so pretty.

I am now going to bed, in hopes that when I wake up it will be a new and better day. Perhaps the sun will come out? Perhaps it will get above 55 degrees? I have my doubts, but I am keeping my fingers crossed for a miracle.

I will be back tomorrow. Happy Monday, y’all.