I survived the rest of Friday. It was a calmer day than Thursday had been, thankfully. Breakfast got me through until lunch without a problem – and that is always a great thing in my book.

Lunch on Friday was pesto, whole wheat pasta and chicken sausage left overs. My lunch was definitely coveted a bit in the staff lunch room 🙂 I read The Hunger Games for a few minutes during lunch, too. I could have read all day. But instead I had to go back to work. 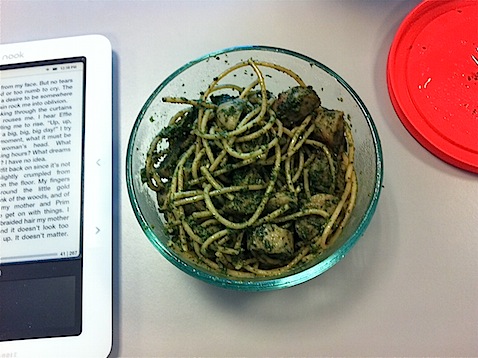 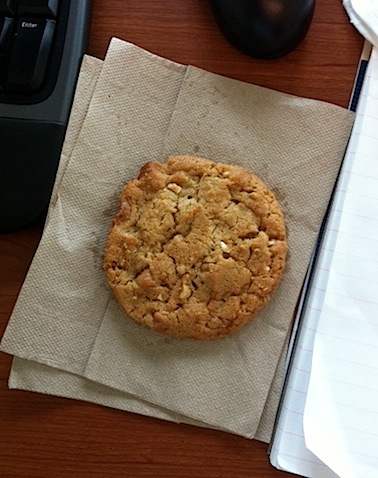 I left the office a a few minutes after four o’clock on Friday. I was exhausted. I was slightly disturbed by how exhausted I was. I knew that I had to go straight to the gym and make up for skipping yesterday’s run. My entire training schedule was a little bit messed up now. So, instead of having a low key workout on Friday, I accomplished 5.65 miles in an hour. The first mile or two I was dragging but eventually I got over the exhaustion, and by the end of the hour I was glad I had gotten the run in.

I was sort of hungry after exercising. I went to East Side Market to see if there was anything I could get for dinner. The answer was a resounding no. Here is what I ended up getting at the market – simply put, the most bizarre assortment of food at the check out counter.

Yogurt anyone!? The Yoplait yogurts were for my mom. The Chobani for me (obviously). But no dinner was found at the Market. I was not pleased. But I was also not surprised, this has been happening to me on a fairly regular basis.

After failing for the umpteenth time at the grocery store, I was still in search of dinner. I decided to go to Cilantro’s for a burrito. I ordered a grilled chicken burrito with brown rice, black beans, salsa, avocado, lettuce, red onions, and so on. I came home and split the burrito with my mom. It was a good post run meal, I guess. 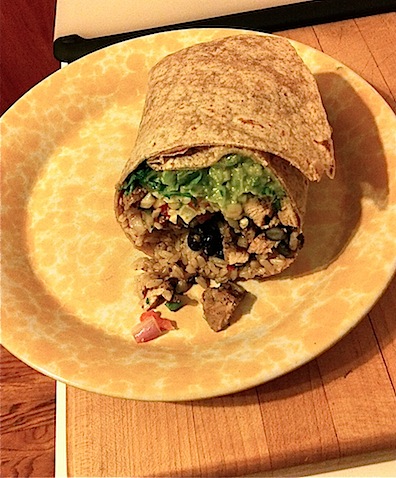 For some reason, I went to bed hungry on Friday night. Probably not a great idea especially since I had a run scheduled for Saturday. Stay tuned for that… I hope everyone is having a good weekend so far.