I am really happy that Monday is over 🙂 I have to tell you that I had work nightmares all weekend and I feel much better having survived my day today. Woohoo! Not only did I survive, I accomplished a good amount of stuff after work.

But before I fast forward to the end of the day, here is a brief recap of my day in food!

This morning I had no idea when I would be able to eat lunch, so I opted for a bigger than normal breakfast. I ordered an everything bagel and a medium coffee at Honey Dew Donuts on my way to work. I sipped on the coffee on the drive in while listening to NPR. I had the bagel once I got to work.

I was able to have lunch because my big meeting of the day was pushed back until 1 o’clock. Lunch was good but on the light side (sort of – it wasn’t really light in calories or carbs! I have to get back on track tomorrow). Can we discuss for one moment how awesome Barney Butter is???!! I haven’t had it in a year or two because I have been opting for other almond butters. But last night I saw a single serving pack of Barney Butter at Shaws and I asked my friend to buy it for me because I didn’t have my wallet. (Honestly?? I really wanted the small jar – but I couldn’t explain why I would ask someone to buy me an eight dollar jar of nut butter!)

I was feeling stressed out today – and Barney Butter and a Granny smith apple really made me feel so much better! Here is what I had for lunch: 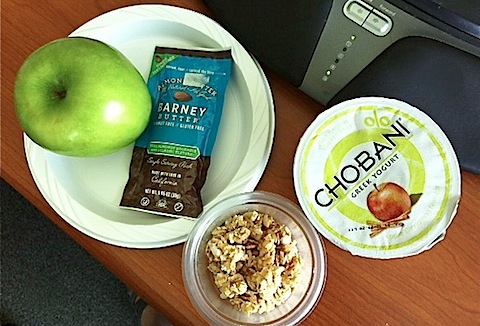 A Greek yogurt, low fat Trader Joe’s granola, an apple and two tablespoons of almond butter. Holy yum! I could eat this for lunch every single day. 🙂

On my way from work to the gym I listened to the Last Lion on tape (or via iPhone of course!). I had gone for a nice (and sort of slow??) walk at 3 o’clock after my meeting was over to decompress. I realized that it was pretty steamy and very humid outside and I decided it was too hot and the air was too thick to run outside after work. I was dismayed to think that I would be stuck on the treadmill. But I did it anyway – I did 30 minutes of “treadmill work” as my running friends and I call it. I ran slowly, trying not to get stressed about the treadmill (I hate running on the treadmill – did you know that??) I ran one mile and then did a brisk walk at a 5 incline for a minute. Then I ran again. In 30 minutes I covered just over 2 1/2 miles. It was slow, but I’m glad I did something rather than going straight home.

After the gym I popped by one of my favorite markets, East Side Market. They have the best rotisserie chicken – just in case you were wondering! The chicken is $7.99 and it is already cooked and it will last you for several meals. I came up with the idea as I was running. It sounded SO good. I have been having a really weird craving lately – fried chicken. Can you believe that?? So, anyhow. I opted for rotisserie instead. When I got home I cut up some chicken, I heated up a low carb, 50 calorie wrap with some black beans and 50% reduced fat Cabot cheddar cheese and then put salsa and chicken on the wrap once it was warm. It was a great dinner! I could have had another wrap – but I had oatmeal cookies to make.

I made one batch of oatmeal cookies to bring to work because we have a long (over two hour) meeting tomorrow morning. I thought cookies might help everyone get through the meeting without falling asleep. 🙂 I did half the batch with chocolate chips and the other half dried cranberries. Yum. Mom tried both to let me know that both cookies were ok – thanks, Mom!

Ok, I am heading for bed now. It is another long day in the office tomorrow. Catch you on the flip side of Tuesday – have a great day tomorrow, bloggies!

One thought on “A Busy Day”