I have never been one for New Year’s Resolutions… but this year I am making a few! The most important one to my blog readers is that I am reviving the Blog! I’m excited to start talking about food, cooking, and healthy living again. . . It has been a while since I have regularly updated the blog – but in 2016 I will be doing so a few times a week.

My other resolutions are – to eat healthy (for the most part), plan the meals I will be eating at work (which I started in November and I was amazed by how much better I felt when I was not having to make last minute decisions for breakfast and lunch) and getting back into a regular exercise program. In order to help facilitate the exercise, I signed up for a 5k in March and started Couch to 5K on Sunday. I don’t think I needed such an extreme program to get me back in race shape, but I really love having a strick program to follow. The other exercise goal is to reach at least 10,000 steps every day (via my Fitbit). On the weekends I often have a hard time getting to 10,000 unless I go for a long walk or run.

I’ve started all of these resolutions before ringing in 2016 – and I feel like I am getting a jumpstart on my new goals. It is a pretty good feeling!

Besides being busy making resolutions, I have also been cooking and baking. Here is a quick recap of what has been going on in the kitchen:

On Christmas Eve I was asked to bring my (now famous) baked brie. Some people think making a baked brie is really complicated – but let me tell you, it is really not that bad if you take a couple of short cuts! Here is how I made my baked brie…

First, I bought two small rounds of a mild brie – personally I do not like overly ripe brie. If you are bringing it to an event it is more likely to be a success if you go with a mild crowd pleaser. I used brie by Alouette. To bake the brie: Preheat your oven to 400 degrees. I used pre-made pie crust (I hate admitting this – but it will really help you make a appetizer that will be likely to succeed) I used Pillsbury pie crust. I placed a round of brie in the center of each pie crust and if the rind of the brie was thick, I gently cut off the excess. Once the brie was prepped, I spread a nice helping of Raspberry Preserves – in my opinion Bonne Maman is the best jam to use for this dish, I just love it! Once the jam was on top of the brie, I brought the edges of the pie crust up to the top and pinched them together:

I applied an egg wash to the dough, and then put them in the oven and baked it at 400 degrees for twenty minutes. The end result was good enough to want to eat before we even got to the family get together!

We served the baked brie with thinly sliced pieces of salami and wheat crackers. The first brie disappeared after 15 minutes – I was glad we had brought two to the party!

On a more healthy note, I have been dedicating an hour or two on Sundays to preparing my breakfasts and lunches for Monday, Tuesday and Wednesday – and on Wednesday nights I do the same for the rest of the week. I love this new routine – even though sometimes it can be a challenge to have the time to plan, cook and pack the meals. But most of the time it has been working out. A lot of the time I will cook up two chicken breasts, roast or steam broccoli and cook up some butternut squash for my lunches. While all of this is happening I have three servings of rice going in my rice cooker (I love this hands off machine so much!) In just a little bit of time I have three lunches ready to go. Most mornings I am eating either yogurt with fresh berries or oatmeal. I also pack my snacks, usually an apple, a clementine and a small bag of popcorn. The other day I had other fixings to go with my chicken – and I packed a salad for lunch. It really hit the spot! 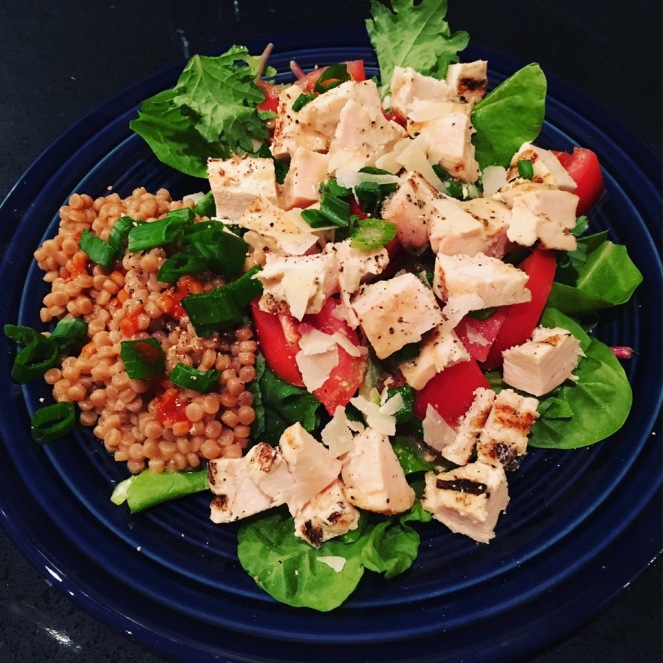 (key ingredients in the mix: spinach and arugula, grilled chicken, tomatoes, scallions, and whole wheat couscous – I dressed this with balsamic vinegar and a dash of EVOO.)

In addition to the resolutions, I am still working on the (never ending) cookbook project. I am really excited for what 2016 holds for all of us! I hope you will tune into the blog to see how the year unfolds for me and my new culinary adventures.