Happy Thursday, everyone! This week has been a strange one for me – but now I’m a bit surprised that it is Thursday already – what a good feeling! I am getting excited for the weekend, because I will be going to New York tomorrow afternoon where I have quite a busy and fun weekend planned out where I will be meeting up with a lot of old college friends.

Last night was the first night that I slept really well in a few days. What a great feeling that was! I was also able to set my alarm for 6am rather than 5:30 because I decided to take the train to work. When I take the train to work I get to leave the house at 6:30 rather than 6:05 and even though it adds time to my daily commute, I still appreciate not having to drive. I love relaxing with a book or grabbing a quick semi-nap on the train.

Breakfast this morning was another smoothie. I have been making smoothies almost every morning since the hot weather hit over Memorial Day weekend. The ingredients are pretty much the same every day, and I measure them out the night before and put half of them in a Ziplock container and a small tuperware container.

The morning I fill my blender with a couple of handfuls of ice, dump the other ingredients in and then bit the ‘smoothie’ button and let the blender do the trick. I have a feeling that I might need a new blender by the time summer is out… The one I have is several years old, but with a little cajoling it is doing the trick so far. 🙂

Most days the smoothie holds me over until my late morning snack which is usually a 100 calorie Larabar or something similar. Today the smoothie got me through until lunch time which made me really happy.

Lunch today was [finally] not my summer cassoulet. I was happy to be able to have something different after eating the cassoulet for four days straight – even though it was really good. Today’s lunch was not as homemade, but it did the trick. Last night I was not feeling creative, so I decided to pack an Amy’s burrito. I threw in some sliced red and yellow pepper sticks, and carrots with hummus for good measure. It was a good lunch.

After lunch I walked to Dunkin’ Donuts with a couple of colleagues and enjoyed an iced coffee with milk on the walk back to the office. My afternoon snack was a Stoneyfield peach yogurt: 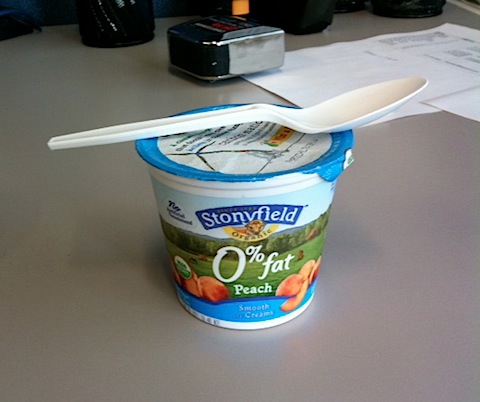 At five o’clock I was on the train home, watching the sky and wondering when the looming storm was going to start. I enjoyed a mini-Larabar (apple pie flavor – so good!!) as my second afternoon snack. I have been so hungry this week for some reason!

I will post about dinner soon, so stay tuned. Happy Thursday everyone!